ULC is a new option in LES that doesn’t break compatibility with the LES protocol, but does significantly reduce the time and resources required to sync with the main Ethereum chain.

The main idea is to reduce the amount of messages and do less client side validation.

What does ULC solves?

Validation of header “chain” for LES and ULC

Verify a seal of a block

The main difference in ULC is that a client doesn’t need to verify the seal of a block and can skip this step completely.

The detailed algorithm can be found on the Ethereum wiki.

The verification has 2 steps: init caches and verify. Let’s describe them in detail.

It needs to generate a verification matrix of pseudo-random values (called cache).

This is the theoretical lower bound. The Ethash Design Rationale mentions that “a light client should become fully operational and be able to verify blocks within 40 seconds in Javascript”.

More details about FNV32-1 hash function can be found here.

This is the theoretical lower bound. As noted in the Ethash Design Rationale, a single block verification step should take '0.1 seconds in Python'. In practice it takes ~200ms in Geth.

Trusted LES servers are needed only to send announcements (in Geth code it has the name announce(block hash, TD, number)) to LES(ULC) clients. All announcements should be signed. Trusted servers don’t know whether they have been chosen as trusted or not by any given client. Such servers can be started with an onlyAnnounce flag, which ensures that the LES server operates under the rule “only send announcements to my peers, do not process any other requests”.

LES servers - usual LES servers, a header chain is synchronised with them. Helps to prevent attacks on trusted servers.

Prevented because it is already prevented in a classic LES model and we only download headers with trusted announcements.

Even less possible than in LES model because you’d need to attack at least M servers.

Possible. ULC makes it much less possible by hiding what nodes are trusted for each user. A user doesn’t send anything unusual for LES to trusted or untrusted servers. Any “trusted for a user” LES server doesn’t know that it has been chosen by the user to be a trusted LES server.

Prevented because all announcements must be signed by according LES server.

What other security guarantees does ULC give and what is it comparable with?

The way ULC handles blockchain synchronisation is the same as LES. Therefore, comparing the security guarantees of ULC with full, fast and LES does not make sense. It is more important to compare the guarantees of a private RPC server or Infura with ULC.

*Failure - in the sense of Byzantine Failure, i.e. either a node crash or some malicious action. Such a failure for a trusted LES node would be sending fake announcements in an attempt to “switch” a user to a malicious chain.

Let’s take several values of the LES server failure probability and see what the probability of ULC breakage of the client is: 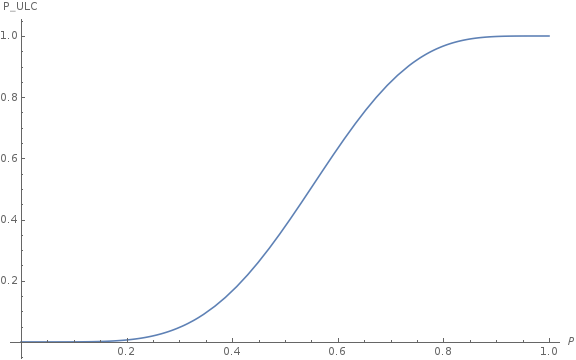 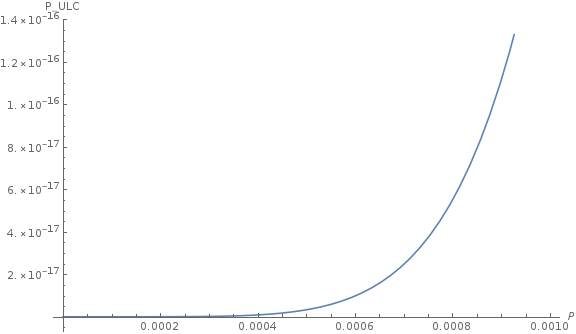 So ULC drastically increases the censorship resistance of an Ethereum client. We can develop a far more reliable system using unreliable nodes.

ULC clients need a set of trusted LES servers to get the current Chain state. It should be said that only ULC clients knows their own trusted list, LES servers don’t know whether they’ve been chosen as trusted by some ULC client. The key difference is that ULC clients request and accept only the signed announcements needed to trust some nonce (PoW) without performing their own check.

We’re going to provide, predefined in the App, a trusted LES servers list. This also means that an application wanting to use ULC can define their own such trusted list of clients and do load balancing with a simple random choice.

One of the major drawbacks currently, however, is that LES servers can handle only a limited number of clients. At the moment it’s $LES_limit=25$.

It is for this reason that a new option was added in ULC for LES servers: --onlyAnnounce. This flag ensures LES servers only handle get announce requests, which increases the possible number of simultaneous users to about ~250 (should be stress tested).

It’s obvious that scaling due to server expansion inside the service is strictly limited. A prerequisite for the operation of ULC at large scales is an increase in the percentage of LES of servers relative to all Ethereum servers.

At the moment there are 15000 nodes. If 30% of them would use the LES server option, more than 300 000 ULC users could be handled simultaneously.

Status.im is going to start using ULC to achieve greater censorship resistance and enable all possible web3 features for DApps and developers.